TALE, the IEEE International Conference on Teaching, Assessment and Learning for Engineering, is one of three key conferences of the IEEE Education Society. This year, TALE was held at the Bali Dynasty Resort, a resort on the shores of Kuta Beach, Bali , 26-29 August 2013. Indonesia was recommended to host the TALE Conference by Prof. Michael Lightner (ex IEEE Education Society President), who had observed the way the IEEE Indonesia Section organised IEEE CYBERNETICSCOM 2012, where he was present as a keynote speaker. Despite the obtained recommendations, the Indonesian team should still needed to bid on TALE 2012 at Hong Kong.

The technical aspects of the conference were organised by the IEEE Education Society. The IEEE Indonesia Section needed only to organise the event. The operation was led by Dr. Ford Lumban Gaol as the General Chair. He is also the vice chair of the IEEE Indonesia Section. Some universities provided some supports, especially Bina Nusantara University in Jakarta. TALE was carried out in serial with the APCC.

I arrived in Bali on Monday afternoon, August 26. Ngurah Rai Airport was still in the process of intensive renovation. From the airport, we needed only 10 minuted to reach the Dynasty Resort. The first day of TALE was occupied by tutorials and workshop activities. I attended some workshop sessions, then I spent the afternoon biking along Kuta Beach, until the sunset. At night , there was a Welcome Party, with some introductions to the VIP and committees. Presented at the event were Prof. Manuel Castro (IEEE Education Society, President), Dr Alain Chesnais (ACM, Past President), Prof. Sorel Reisman (ex IEEE Computer Society President), etc. I spent a lot of time discussing with colleagues from Bangalore .

(TALE photo session after the Opening Ceremony 2013 : All in Batik)

The opening ceremony was held on August 27 morning. Opening speeches are presented by  Dr. Ford Lumban Gaol as General Chair; Prof. Gerardus Polla (ex Rector of Binus University) who represented Binus as co-organiser; then IEEE Indonesia Section representation — yours truly. I started with the paradox that although almost all technological advances has been initiated or supported by the education, but the ICT has not been widely revolutionised the education field (compared to — for example — the field of communications , transportation, industry , etc.). ICT infrastructure for this purpose could be considered quite ready. But just to convert the education content and interaction into digital forms would be far from sufficient to achieve the expectations of creating a new way to educate more people, anyone, of any age, anywhere, in ways that remain humane and not by separating people with their natural environment. A new paradigm is required for a lifetime process of human education, with the support of pervasive ICT infrastructure. It was actually just the opening for the discussion :). Then the conference was opened by Prof. Gerard Polla with Balinese gong. Booom – booom – booom .

The keynote speeches were delivered by Prof. Manuel Castro of the IEEE Education Society, Prof. Ken Kawan Soetanto, and Prof. Satryo Soemantri Brodjonegoro from Binus Advisory Board. The education field is indeed interesting, encouraging, with a broad impact. Discussions on the keynote sessions were pretty hot, resembling various visions. We easily observed many pros and cons on every aspect of e-learning  digital education, and others. But those battles of the titans had made this kind of a conference so much more interesting than just reading the paper stacks 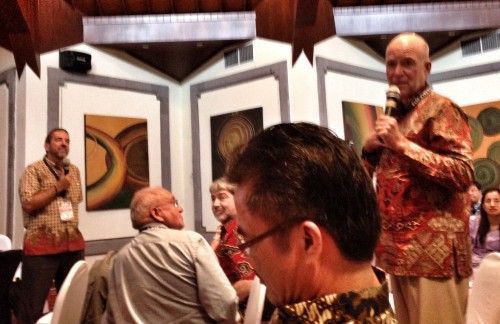 The conference continued with parallel presentation sessions. The discussions about education were still as hot as the discussion at the keynote sessions. At night, we had a Gala Dinner session to display the culture of the region: from Balinese Dance to Asia Pacific songs and music. The last day, August 29th (the same day as the opening of the APCC), Bali was still consistent with its fresh but hot weather. We closed the conference with the awarding session by Alain Chesnais. I presented the closing remarks, and then closed the conference. This time there was no gong. So I closed this extremely important international conference with a bread knife tapped on a white cup . Tinq – tinq – tinq, and TALE 2013 was closed .